We do not eat turtles. Turtles eat pizza. There was a time in the U.S. where turtle soup was a popular dish. In early black and white movies, it was common to see turtle soup on a menu. The waning of the dish grew because of our affinity for the turtle being a cute creature.  From Pogo’s bard of the swamp “Churchy” to the Teenage Mutant Ninja Turtles, we were conditioned to not eat turtles but to make them our pets. The peak of turtle soup came when an overpopulation of people rushed to the San Fransico area during the Gold Rush. Food was very expensive.
In 1971, The Endangered Species Act was passed and killing sea turtles in United States waters was prohibited.  Granday’s and other turtle canneries went out of business.
“Two days after voting for independence in Philadelphia, on July 4, 1776, John Adams celebrated with a bowl of turtle soup; when the war was over, George Washington met with his officers at Fraunces Tavern in lower Manhattan for a farewell frolic; and Lincoln celebrated his second inaugural with terrapin stew. Before Aaron Burr murdered Alexander Hamilton, both were members of the elite Hoboken Turtle Club.” 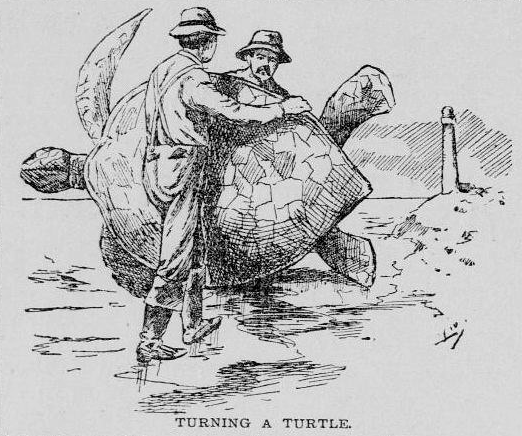 “In the end, turtle soup became the victim of its own overwhelming popularity. It migrated from presidential dinners down to railway dining cars, and finally to the red and white Campbell’s can in the 1920s. By World War II, harried cooks had long tired of dressing their own turtles, and cheaper and tastier canned options to turtle became available. Newfangled convenience products like TV dinners and Spam were the final strikes against the increasingly unfashionable turtle soup, and by the 1960s it had gone the way of pepper pot, served only in certain regions of America.”

“During the Gold Rush and for a few decades afterward, frustrated and starving Californians resorted to eating and importing sea turtles. Miners filled their pockets and stomachs by stripping neighboring landscapes bare. Today, wildlife populations, particularly turtles, are still recovering from the era’s ravaging hands.”