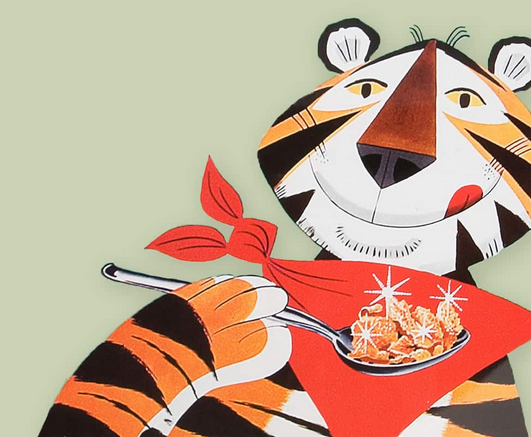 Kellogg’s Sugar Frosted Flakes of Corn was introduced in 1952. Kellogg’s ran a contest with the introduction of the cereal. They wanted the consumer to pick the official mascot for their cereal. In the running were Katy the Kangaroo, Elmo the Elephant, Newt the Gnu and Tony the Tiger. It was a fierce battle, but a year later Tony the Tiger was victorious. The original voice of Tony the Tiger was Dallas McKennon who also voiced Gumby and the original Snap, Crackle and Pop voices for Rice Krispies.
Fun Fact: Tony the Tiger, Kellogg’s Frosties mascot, once asked followers to stop sending him anthropomorphic animal porn via Twitter.