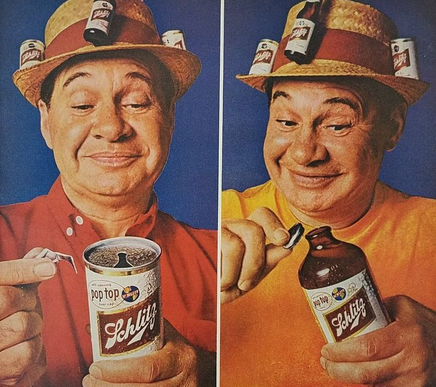 Food from the past: The invention of the pop top beer can

Words sometimes like food can be digested with delight. In 1963 Schlitz started nationally using pop-top cans for their beer. Three years later cans were out-selling beer in bottles. Pulitzer Prize writer John Updike wrote a thirst quenching bit for The New Yorker in 1964 about the progress of man using the beer can as a simile. This is one meaty morsel of literature to bite into.
“This seems to be an era of gratuitous inventions and negative improvements. Consider the beer can. It was beautiful – as beautiful as the clothespin, as inevitable as the wine bottle, as dignified and reassuring as the fire hydrant. A tranquil cylinder of delightfully resonant metal, it could be opened in an instant, requiring only the application of a handy gadget freely dispensed by every grocer. Who can forget the small, symmetrical thrill of those two triangular punctures, the dainty pfff, the little crest of suds that foamed eagerly in the exultation of release? Now we are given, instead, a top beetling with an ugly, shmoo-shaped tab, which, after fiercely resisting the tugging, bleeding fingers of the thirsty man, threatens his lips with a dangerous and hideous hole. However, we have discovered a way to thwart Progress, usually so unthwartable. Turn the beer can upside down and open the bottom. The bottom is still the way the top used to be. True, this operation gives the beer an unsettling jolt, and the sight of a consistently inverted beer can might make people edgy, not to say queasy. But the latter difficulty could be eliminated if manufacturers would design cans that looked the same whichever end was up, like playing cards. What we need is Progress with an escape hatch.”